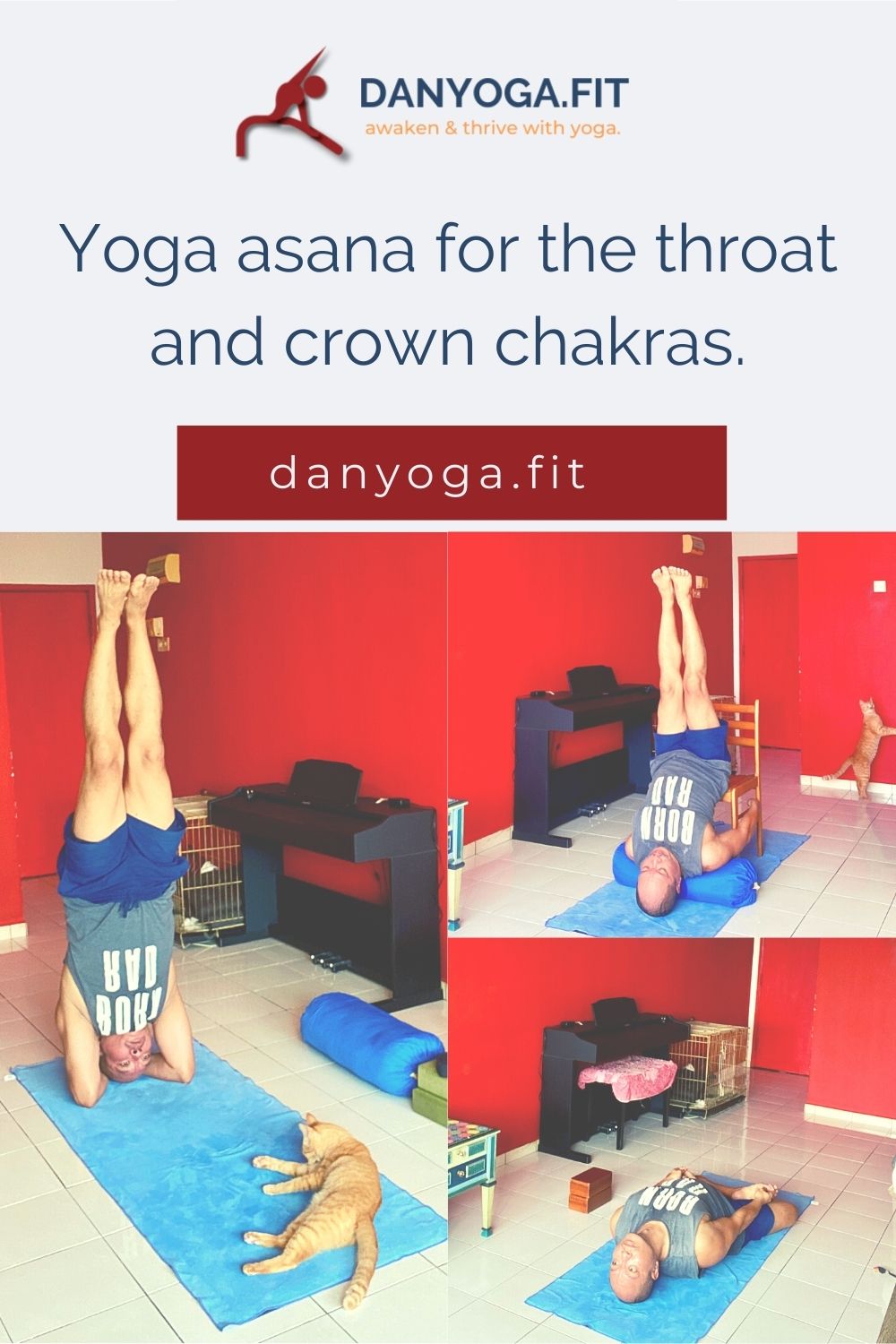 Don’t be too concerned about this, just know that things can be better if you work on these areas of the body.

The vishuddha chakra is located at the throat centre, while the sahasrara chakra is at the crown of the head. Learn more about them in the post below:

To learn more about chakras in general, check out the blog post below:

Now, let’s take a look at which yoga asana may help you with the vishuddha and sahasrara chakras respectively (a meditation is prepared for the ajna chakra).

Yoga asana for the vishuddha.

Any yoga asana that either gently compresses or opens up the throat helps with supporting your vishuddha chakra. However, because your neck is a fragile portion of the spine, these yoga postures need to be entered into, and exited out of, super carefully.

Also, do not stay in these yoga poses for great lengths of time. Personally, I would recommend one minute maximum if you are just starting out, and three to five minutes if your practice is safe.

NOTE: Please consult a medical professional before you practise these yoga poses, especially if you have bone, spinal, neck or nerve issues

This is the supported version of Shoulderstand, and is safer than the unsupported expression (called niralamba sarvangasana). Most supported shoulderstand utilise rolled or folded blankets or towels. Both are good options.

Alternatively, I have used a yoga bolster and a chair in this photo as support.

Another alternative is to use the wall to support your legs, but again, don’t get to comfortable and remain in the pose for more than three minutes.

This yoga posture is considered the “queen of yoga asana, and some of benefits include:

I am not including a step-by-step guide here deliberately because I feel this pose requires guidance (whether virtually via video call or in-person), so please do contact me for guidance – or another yoga teacher, of course [please do exercise caution with this pose, whether you are a beginner or a seasoned practitioner].

This yoga posture is very similar to Salamba Sarvangasana above, the difference being that your legs extend above your head, rather than upward to the sky.

Because of the similarity, I would highly encourage a supported position, either with blankets or towels, or with a bolster and chair, as depicted.

Again, like shoulderstand, I am not writing a step-by-step because this pose requires guidance, whether from me or another yoga teacher.

The benefits of this yoga pose is similar to Sarvangasana above as well.

In terms of myths behind the yoga asana, once, the Buddha – Siddhartha Gautama of the Sakya clan -asked a farmer for food. The farmer retorted, “I plough, sow, reap and eat. What do you do?”.

To this, the Buddha responded, “I also plough, sow, reap and eat. I plough the mind with dhamma, I sow discipline, I reap mindfulness and eat the end of suffering. I share this food with all, just as you should.”

This yoga pose is usually practised as a counter pose to shoulderstand and plough pose (see above). However, you may practise this pose on its own.

Also, traditionally the yoga posture is practised with the legs in lotus (as shown here), but you may keep your legs straight and activated as an alternative. Do what feels right for your body.

Yoga stories has a similar Noah’s Ark tale, where Vishnu’s first avatar was a fish. The fish was small, and he asked the first person, Manu, to look after him. Manu agreed, and kept him in a pot, but the fish kept growing bigger and bigger.

Eventually, the fish grew so big that Manu had to free him in the river. The fish promised to return to rescue Manu.

One day, it began raining so heavily and the world became flooded. The fish came back to warn to Manu to take all that mattered – seeds, animals, knowledge – and to board a ship, that would be kept safe by the fish.

In this sense, the fish rescured Manu.

Yoga asana for the sahasrara.

Usually, the understanding that any yoga posture that causes the feet to touch the head through a deep backbend (such as Vrschikasana / Scorpion Pose) may help support your crown chakra. For our purposes, we will just work on sirsasana (headstand) in supported form (two variations).

Any inversion – even salamba sarvangasana above – requires core activation and strength. For sarvangasana above, good shoulder extension and proper placement of neck is vital. The neck also is crucial in headstand.

The key to this yoga pose is to avoid placing too much weight on your head and neck. Instead, let your arms and shoulders support your practice, with the head just touching (rather than being compressed) the mat.

To further remove weight from the head and neck, especially if your shoulders and arms are not strong enough, you could attempt a tripod headstand with yoga block support, as depicted below.

Headstand (or any inversion) gives you new perspective, helps the flow of blood and fluids in your body, and energises the body. As with shoulderstand above, no step-by-step instructions are included, as it is much more advisable for you to get a teacher to guide you, whether online or in-person. If you would like that teacher to be me, contact me here.

The throat chakra represents expression and “vishuddi” means “pure”, while the element of the crown chakra is thought. Our road towards spirituality hopefully will be fortified and made better thought the yoga asana practices of – not just these – but all asanas presented here.

In the meantime, happy practising!

Expand and thrive in your yoga mat practise with on-demand yoga classes below!

I want them them!