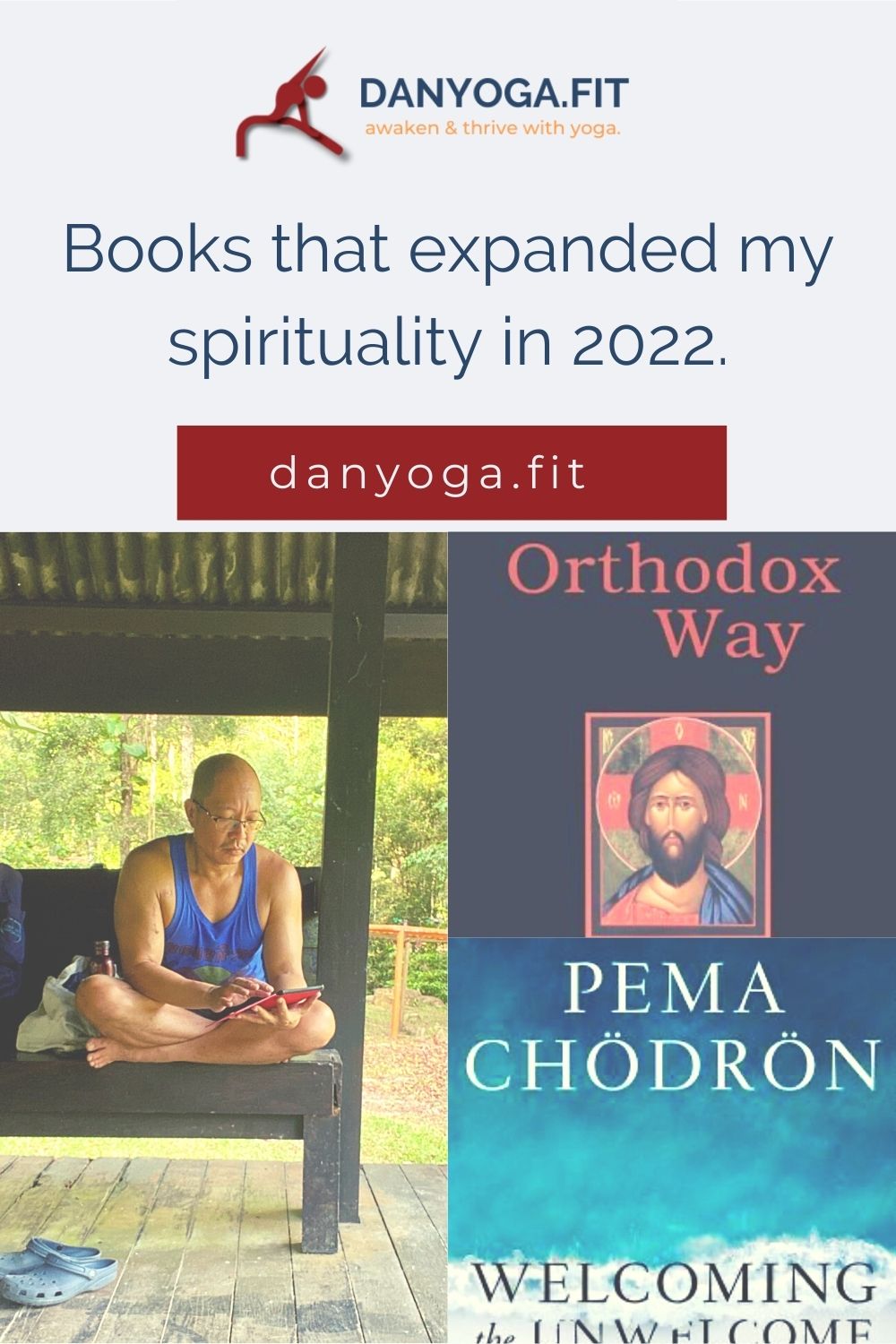 My father passed away in late October 2022. Friends whose parents passed on already – and who noted both my parents’ ailing bodies – had told me that one never gets over the death of a parent. I expect this to be true.

Grief comes and goes but it is as if the universe (God, or the Divine, whichever name suits you) wanted to prepare me. Of the 80-over books I read in 2022 (mostly fiction, actually 😅), four books stand out in helping me develop spiritually, and which also helped me handled the stress and anxiety of my father’s hospitalisation and also his departure from this earthly life.

‘The Orthodox Way’ by Kallistos Ware.

I am a Christian, an Anglican (Anglo-Catholic / Church of England etc. – so not really ‘Protestant’ as such). While growing up, I struggled a lot with what I was taught, until I myself read the Bible from cover to cover. Over the years, I have read quite a number of translations / interpretations of the Bible, but I still felt Christianity lacked a certain deeper spiritual dimension.

This was until I picked up this book, ‘The Orthodox Way’ by Bishop Kallistos Ware (Timothy Ware), and found how deeply spiritual Christianity is / can be.

“We see that it is not the task of Christianity to provide easy answers to every question, but to make us progressively aware of a mystery. God is not so much the object of our knowledge as the cause of our wonder.

I have always been told how deeply spiritual the Orthodox Church is, but have never had the opportunity to delve in it. This book helped me see how rich our Bible is, and how multi-dimensional it is (compared to the usual contemporary way of looking at things in black/white, good/evil, nice/naughty etc.).

I think that was one of the things I found missing in my spiritual growth as a Christian. Even though I spent time in Ignatian spirituality, as well as other forms of Christian meditation, reading this book helped me coalesce with the spiritual theology of Christianity in a much deeper sense.

If you are a non-Orthodox Christian seeking some form of spirituality in your faith, read this book. It will open up new perspectives for you.

‘Welcoming the Unwelcome’ by Pema Chödrön.

This books really helped me a lot during the whole of 2022. In fact, Pema Chödrön on the whole helped, as I had read ‘The Pocket Pema Chödrön’ before this book.

The rain in the morning isn’t good or bad, comforting or threatening. It’s not even “rain.” It’s just what it is.

One key takeaway I had from Pema Chödrön is how she advises us to relax with things we usually consider undesirable. For me, can I learn to relax with heavy traffic? With confrontations? With a haphazard ridiculous schedule?

I tried practising this even prior to my father’s hospitalisation in late September. This practice came in handy because once my father was hospitalised, things became crazy.

all of us have had to start in the same place—as confused, reactive, but basically good human beings.

Doctors would give us three hours’ notice to meet, or to purchase medication unavailable at public hospitals, my schedule went out of whack and my finances went down the drain (having to dig into my savings due to the considerable number of sessions I had to cancel).

She also said this:

… expanding our ability to feel comfortable in our own skin and in the world, so that we can be there as much as possible for other people, is a very worthy way to spend a human life.

So I spent quite a lot of time giving to both my father in hospital and my mother (wheelchair-bound) at home during this period. Unlike when I was younger, there was no resentment on my part. All I felt was love for them, and their love for me.

This book is for those who are struggling to manage in life in general. Even though couched in Buddhist terms, I highly recommend this book to everyone. Buddhism is a philosophy that fits anyone’s way of life.

I was drawn to this book because iconic Thich Nhat Hanh was looking at Christianity through the lens of a Buddhist. He strongly believes the way to God is through the Holy Spirit, just as the route to nirvana is through mindfulness. He says:

Discussing God is not the best use of our energy. If we touch the Holy Spirit, we touch God not as a concept but as a living reality.

Many things he wrote about makes so much sense to me. In addition, he discusses mindfulness in depth, and being mindful, being present is also a key concept in yoga.

Touching the present moment, we realize that the present is made of the past and is creating the future.

He also discusses the horrors of the Vietnam War, and if ever there was suffering, it would be during war. He brought my awareness to the idea that suffering is the flip side of joy. I mean, I knew it before, but he expresses it very eloquently, which brings me to another reason why this book is so good – Thich Nhat Hanh writes very picturesquely.

Of course, this book helped me handle my father’s suffering. And strangely, my father in his suffering in hospital, said that he has never felt so much joy!

If you love someone but rarely make yourself available to him or her, that is not true love.

This is a worthwhile book to read, especially if you are a Christian, a Buddhist, a yogi or just a human. Take a read!

The genuineness of a friend is shown at a time of trial, if he shares the distress you suffer.

Stillness, prayer, love and self-control are a four-horsed chariot bearing the intellect to heaven.

This book gives a totally new dimension to the Bible, especially to the Old Testament. It is perhaps what I always sought in Christianity, and nothing posited sounds artificial or forced. In fact, the theology expounded shares a lot with what Pema Chödrön and Thich Nhat Hanh share in the books listed here.

To each virtue there is an opposing vice; hence the wicked take vices for virtues.

If you are a Christian seeking more dimension to your spiritual life, then this is for you.

I hope to share more spiritual books that have helped me in the years to come.

During the pandemic, I went back to books – a love for which I had since I was very young. I began reading loads of fiction, but later told myself I needed to expand myself, so I read non-fiction during the day, and fiction during non-working hours.

Stay tuned for more, or contact me if you need spiritual book recommendations!

Join my Facebook group with full class sequences and talks on yoga & mindfulness!