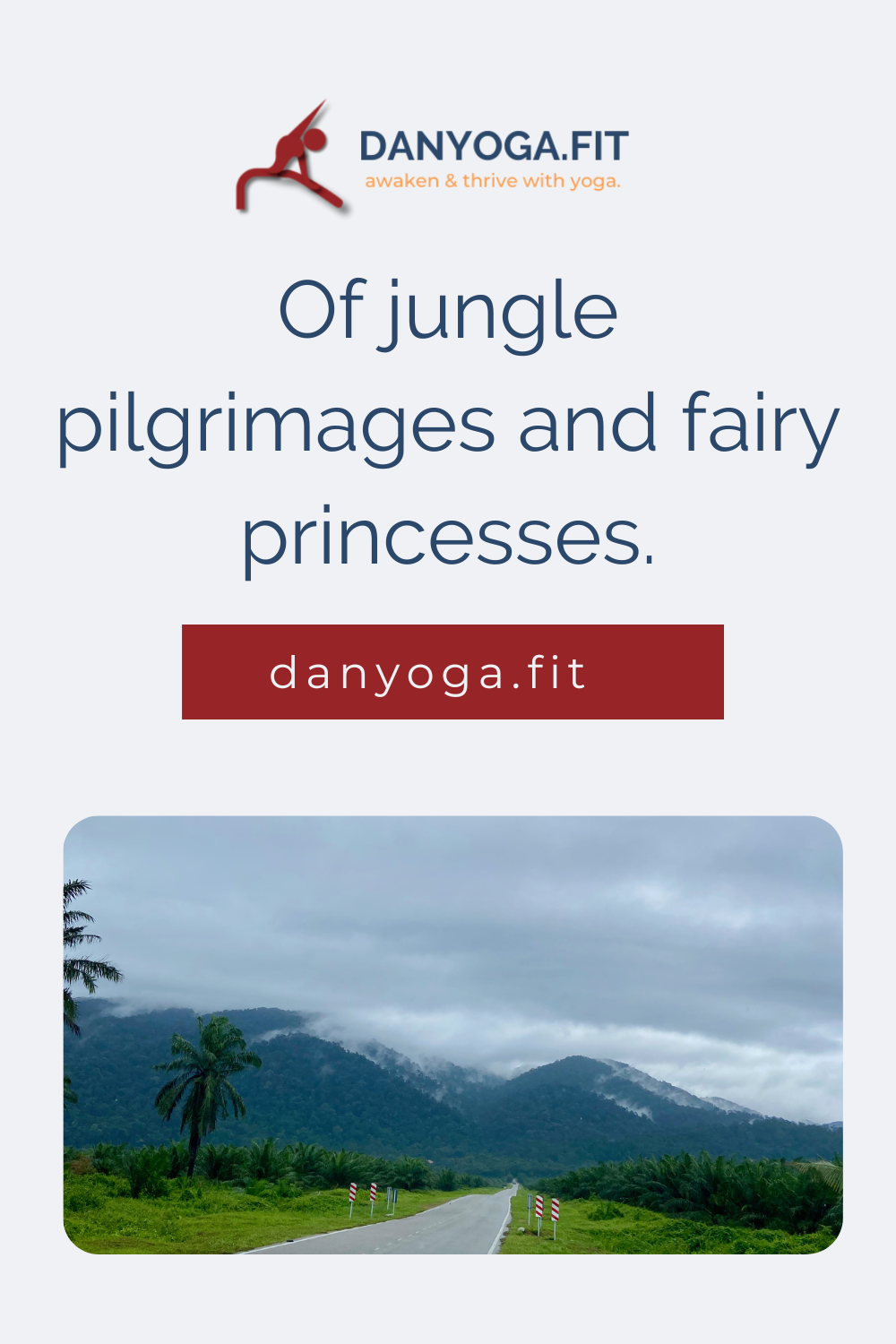 Sometime in the middle of the year, Eddy and I were asked if we were interested to go to Taman Negara Gunung Ledang for the Compass Catholic first ever pilgrimage. Just as an aside, the Compass Catholic mission aids anyone (religious values aside) with their managing their finances. Of course, being a Catholic endeavour, if you were to join, you would be exposed to Catholic values (which is fine with me, growing up in a Catholic school and also fascinated with the older churches of the world).

Anyway, when reflecting on a patron saint, Eddy suggested St. Matthew, who is the patron saint of bankers (and I assume also of finances). And so, as the first pilgrimage of this mission, they organised a visit to St. Matthew’s church, Tangkak, Johore.

Those who chose to go for the pilgrimage would have a choice of either camping in the compounds of the forest reserve, or renting a chalet.

Eddy and I thought it sounded like an adventure, so we went with the chalet. This is how we got a taste of this small region, north of Johore, near the Malaccan border.

Arrival at the hills.

Eddy and I are privileged to travel when we want, usually, avoiding long weekends, public holidays, and sometimes school holidays. If you don’t know Malaysian traffic, then take a trip during any of these occasions and you will have your fill and more‼️ 😅

So there we were, immersed in traffic, trying to “relax with it”, but a two-hour car ride ended up as five hours (yes, we did stop, but not for long, just coffee to-go and toilet). After Seramban, traffic was thankfully clear.

In order to get to the forest reserve, we bypassed Tangkak, a small town near the northern border of Johore. Some people who climb Gunung Ledang (I was told) stay in Malacca, and drive down to the mountain, about a half hour drive.

Tangkak may have a ‘small town’ vibe, but we learnt later how sprawling it actually is! Still, it was refreshing to be there, with its old double-storey storefronts and occasional hawker by the roadside (all sort of getting more and more rare in the city).

We reached the actual compound of the forest reserve (Taman Negara is the protected forest reserve of Peninsula Malaysia, mostly centred in the middle of the peninsula, enclosing the mountain range) around 1430. Luckily some of the pilgrims bought lunch for us, which we gratefully ate on a bench outside the main building.

We checked in and got our chalets (which I admit looked far bigger in the promotional material than in real life). The chalets are on a slope and looked great from the outside, but are really basic on the inside. In fact, these chalets are even more basic than the rooms we got at the ashram at Rishikesh❗️

Still, it was what it was and I was there, so I practised yogi-like skills to look on the situation with equanimity, and to make the best of the situation because, after five hours on the road, we were not about to head back.

We refreshed ourselves, then headed down for mass at St. Matthew. I reminded myself that even though I saw the weekend as a nature adventure, the primary reason we were there was for a pilgrimage to St. Matthew.

We drove off in a semi-convoy (no one unduly concerned about getting lost because of Waze 🎊) to the church, noting the vast expanses of green along the way, the Muslim religious hostel for orphans, and other institutions they usually build in these areas, away from the urban hustle).

St. Matthew’s Catholic Church is an airy spacious structure, with plenty of parking and the usual grotto of Mary in its compound. It really is quite an attractive church.

Air-conditioning was not needed, and the mass was quite beautiful, conducted by Father Bartholomew KC Wong. In fact, he especially conducted the mass for us, noting that this was probably the first occasion for an English mass in that church (it is a Chinese-speaking church).

We then had dinner, and discovered that Tangkak really isn’t as small as one would think. Some of the eateries we headed to took us a good 15 minutes, even though roads were clear and traffic lights were green.

Okay, so we were the ‘softies’ who took chalets, rather than build ourselves a camp, and sit around the campfire, but… you know, whatever 😅. For Eddy and I, the chalet we shared with two other ladies, was definitely more rough than our rooms in the ashram in Rishikesh (which cost less and included food, by the way!).

For one, the space we had at Gunung Ledang was small and a little cramped. The promo photos made everything seem very spacious, but trust me, these chalets are small. That’s okay though, we still would have come had we known, but we were a little thrown off by the great marketing photography.

All this aside, this is the probably the closest I have been spending nights so near a forest reserve (trudging around forest reserves for boot camp aside – I didn’t sleep overnight in any). I bet many camping aficionados will find this funny, but hey, I think there are more urbanites like me than there are of forest campers.

So it was an experience. Evenings and nights were cool, and the whole environment was refreshing. I found myself waking at my usual 0600 AM, heading out with my own cup of coffee and prowling the grounds and observing the very happy jungle dogs, all of whom seem to rule the area.

The sunrise outside the compound by the palm oil plantations was beautiful. Apparently, it is a tourist attraction because there was a queue to climb the boulder to take a photo of the rising sun. Sadly, one family hogged the spot until the sun had fully risen…

I also chatted with the guards, who insisted we absolutely do not risk climbing up Gunung Ledang without (1) a permit (2) insurance and (3) a guide. All of these are available to book at the admin office within the compound.

I asked whether anyone had every got lost up in the mountains, and they responded, “Many times,” and usually these were people who sneaked into the jungle without a guide, trying to get to the peak on their own.

I also asked – being the person that I am – whether any of these people who got lost was caused by ‘orang halus’ (the Malaysian version of fairies, for want of a better description), and the guards responded, “Too many to count”.

For those interested, Gunung Ledang has a myth about the fairy princess who lived there, you can read more about it here.

The walk to the waterfalls is paved, and has concrete steps, but perhaps not so great if you’re older and less healthy. However, the grounds were tremendously clean, especially compared to the waterfalls open to the public in Ulu Langat and other areas nearer the city.

The waterfall cascades over a huge boulder, and there were many people availing themselves to a picnic and dip. The waterfall is actually quite an attraction, and usually the compound’s car park is full by around 1000 AM in the morning, so come early if you are on a day trip.

On the evening of the second day, we joined the campers for dinner by the fireside, and also some fellowship. I must admit, the cool weather and the community made the experience fun and something to remember.

To add to the whole ‘water’ theme that the universe decide to give us, it rained like crazy on that same evening after dinner. It rained so much, in fact, that the stream by the camp site swelled, with many paths close to the stream flooded and inaccessible by the next morning.

AND we were leaving the next morning, which means most of us got wet vacating the chalets and camp sites as we were checking out. Truth to tell, even though both Eddy and I had an experience to remember, as with most holidays, we were ready to get home. And see our cats!

Traffic heading back was great, and we took our own sweet time.

Have you been to Tangkak / Gunung Ledang? Tell me your thoughts in an email here!

Journey To Your Toes!

A FREE 3-Chapter online yoga immersion that will help you to:

Join this free immersion below 👇🏼1

get me to my toes!