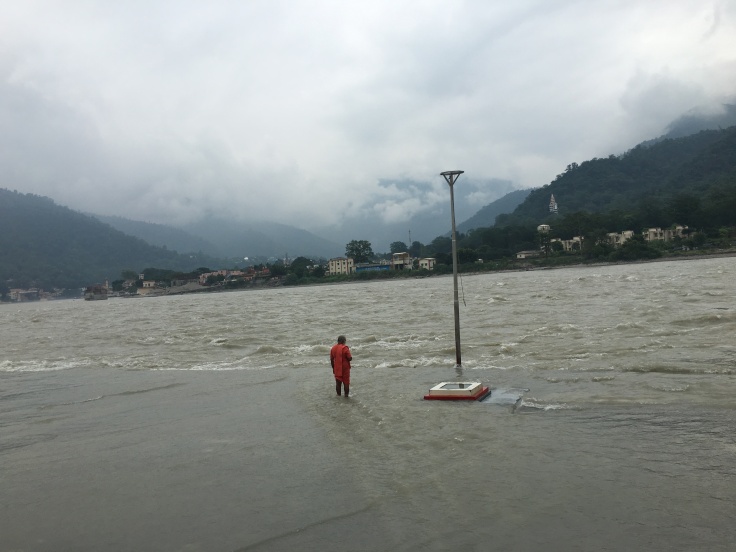 Experiencing the Ganges made the uncomfortable trip from Delhi to Rishikesh totally worthwhile! The river has a spirit and energy like no other river I have experienced before. In fact, some of us upon arrival began crying when seeing the Ganges. It was a very moving experience.

We arrived at four in the morning, having left Delhi around ten the night before by car. The ride was interesting. I will never complain again about potholes in Malaysia after this trip, at least not for awhile. We were mostly dozing or sleeping in the car and it was a relief to finally reach Rishikesh and into the ashram where our guru, Manoj, greeted us.

After a shower and a short nap, we went down at around 7.30 am for breakfast, followed by a walk down the river to the village by Ram Jhula. Firstly, I have never seen so many animals roaming the streets where humans live. Rishikesh is a meat-free town, so there were cows, dogs, goats, pigs and occasional monkeys and apes. Later on, we discovered donkeys, horses and occasional cats. Of course, along with the animals were the droppings, so we had to be careful about where we walked.

I was excited! I had never been to India. While Delhi had been a better experience than I expected, Rishikesh was just beautiful. It was like a storming energy from the Himalayas, flowing down through the Ganges, passing by this town known as the yoga centre of the world. I think having Rishikesh as my first Indian experience was a blessing.

The township by Ram Jhula was pretty interesting and the Sivananda Ashram was probably one of the highlights. Learning more about this yoga guru and how he set up the ashram in the actual setting was a humbling experience, and the calmness felt in his favourite rooms closer to the river was amazing.

Shopping on the other side of the river, after having crossed the Ram Jhula, was good. The Parmarth Niketen ashram on that bank of the Ganges was also interesting. It was a shame that the huge statue of Shiva along the river was washed away in the floods of 2013 as that was a monument to Rishikesh. Thankfully, the statue of Hanuman was unmolested, sitting further up the bank.

After the first day, we began our Manasa Yoga yatra in earnest. We had three major practices a day, with the itinerary looking like this:

The theme was the Ramayana and there were too many takeaways to mention in a blog post. Needless to say, it was enriching and Manoj is a beautiful and humorous storyteller. Perhaps we could have done with a little more alone-time, to journal or walk or reflect. Maybe the group discussion could have been done away with, although I know it served many of the yatrites well.

The Dayananda Ashram where we stayed was nice. The way some people talked about ashram life, one would have thought we might be living in a cave! The living quarters were relatively clean and the people were friendly and curious. There was a book store and water fountains to fill up our bottles. There was a yoga room but mornings we practised outside, even when it drizzled.

In the mornings, the clanging of the bells and the blowing of the conch shell during the puja accompanied our mat practice. Meal times and tea times were announced by bells as well, when we queue up to go into the refectory for food. Chants from the Bhagavad Gita would play on a DVD and most times the residents of the ashram would chant along. The food was amazing yet simple, lots of lentils and interesting forms of rice (yoghurt rice!), and lunch had dessert as well.

The townships at both bridges are markedly different from each other. Ram Jhula, which is closer to where we stayed, seems to be a little busier and has more ashrams and shops. The township surrounding Lakshman Jhula is more hilly, with the shops and buildings perched on slopes. On the other side of the Lakshman bridge seemed more touristy than most of what we had experienced so far. We visited this place on our last day in Rishikesh, our free and easy day.

We decided to walk from Lakshan Jhula to Ram Jhula on this final day, and we experienced the countryside of Rishikesh where we saw a lot of people from Rajasthan visiting the Ganges. The whole countryside was charming, with little stalls selling eatables and souvenirs. Cows and monkeys were plenty, with a few cottages dotting the landscape now and then. The walk took us about an hour.

Life along the Ganges

Because we were there for a yoga retreat, we only managed now and then to come out to watch how life was for the folk of Rishikesh. First, there were the children who sold diyas, which are flowers and rose petals in shallow dishes filled with oil and lit with wicks, as an offering to the river. These kids will surround you as soon as you go close to the river, all of them wanting you to buy from them.

On one occasion, I saw a boy from whom I bought a diya all cleaned up with combed hair selling puri (unleavened deep fried Indian bread) on the weekend. So it seemed he sold those little flower offerings on weekdays and food on the weekend. He smiled at me sheepishly when he saw I recognised him.

I wondered where these children lived, and whether they had parents or a family. From my understanding, the 2013 floods in north India caused a lot of children to have lost their parents. Many boys living in the Dayananda Ashram are orphans, adopted by the ashram after the floods. I think this knowledge lent to the emotional experience of my stay in Rishikesh.

There are definite intentions to go back to Rishikesh. I feel there is so much more to experience there. What about you? Have you visited Rishikesh? What was your experience like?